The FileExplorer is organized into one VB6 project

The FileExplorer source is comprised of about 600 lines of code (LOC).

FileExplorer uses a set of controls from mscomctl.ocx (aka "Microsoft Windows Common Controls 6.0). The techniques used to migrate this library can be applied to other third-party (and in-house) OCXs as well.

The ActiveX control classes and their .NET replacements are listed below:

Note that the table above is just the "top-level" controls that are used in FileExplorer. Every one of these controls contains a collection of sub-controls. These collections and sub-controls must also be migrated. A sample of these sub-controls and their .NET replacements are listed below:

A pivot table of data produced by the Source GUI Scan report for FileExplorer is displayed below. 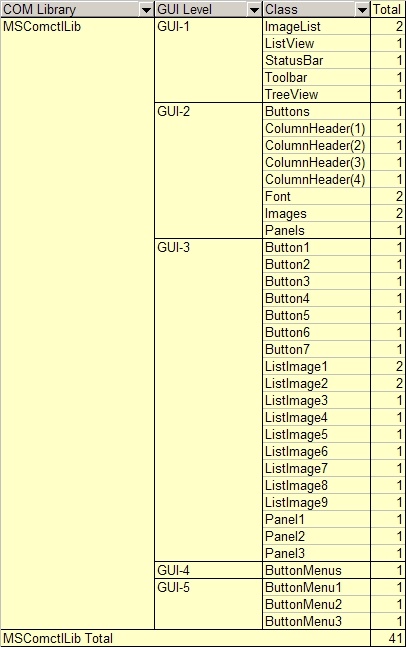 FileExplorer depends on the following external COM components that must be installed on your workstation to perform the migration successfully:

GM.mscomctl.ocx.xml is a hand-modified Interface Description File (IDF) that was initially generated by gmStudio from the COM binary file (MSCOMCTL.OCX). The default, automatically generated, version of the file directs the tool to generate and use a stub framework for the MSCOMCTL controls, or to use the RCW interop assembly. The modified version used for this sample directs the tool to upgrade MSCOMCTL controls to System.Windows.Forms replacements. The top part of the modified IDF contains contains rules describing how to rewrite logic that uses the COM API. The bottom part of the modified IDF provides additional declarations and also references a migration DLL and two gmsl scripts:

The custom IDF and the gmSL files are located in proj\usr. The migration DLL is in the gmStudio installation directory.

Note that the managed migration of FileExplorer also loads two other RefactorLibraries: one to upgrade Scripting to System.IO and one to upgrade RichTextLib.RichTextBox to Winforms.RichTextBox.  The commands used to load these custom migrations are shown below:

For additional details on custom COM replacements see this article.

There are two versions of the FileExplorer upgrade sample:

All the FileExplorer migration projects have the following deployment settings:

Log files showing all migration steps are created in the workspace\log folders.

The .NET project files are deployed to the following folders: